Do creative projects have a lifespan?

Posted on November 13, 2012 by jrwilsondesign

Statue made in college by my mother

I’ve been thinking a lot lately about whether or not to dispose of things that I have created. For that matter, even things that other people have created. I find myself inundated with a lifetime of graphic design projects, watercolors, photographs, craft projects, you name it, that languish in boxes and portfolios scattered throughout my home. I am hard pressed to let go, as if these items have lives for which I am responsible.

I was fortunate to be the daughter of a creative mother. She was an occupational therapist and artist and dollmaker and general expert craft enthusiast. She knew exactly what projects to give me to keep my little creative self occupied on a rainy day (or any day—it was hard to get me to do anything but read and be creative). And she rarely disposed of anything that she (or we) created. Sadly, she is gone, but many of her own projects live on in my home. She also added to my own pile of acidified art by saving my grade school efforts in crayon on construction paper. Yes, that is love.

Two events occurred recently that forced me to think about the impermanence of art, and gave me the opportunity to ponder on the lifespan of creative projects.

I returned to my hometown a lot in the last year to deal with settling my mother’s estate, and work with my brother to properly dispense of her possessions. One of the items he kept was a small statue that she had made in a college art class – an elegant wire-framed plaster sculpture with fluid Modigliani lines of a woman and a dog, the brown paint crackling in an interesting textural way to show the white plaster beneath.

All is but dust in the wind (yes, I’m from Kansas). My brother called to give me the bad news—the statue had been accidentally broken beyond repair and had to be discarded. We were both a bit wistful about this. Losing this item that she had made, and that we had grown up admiring, was like losing a piece of her—particularly since we knew how much love and care she put into everything she made. 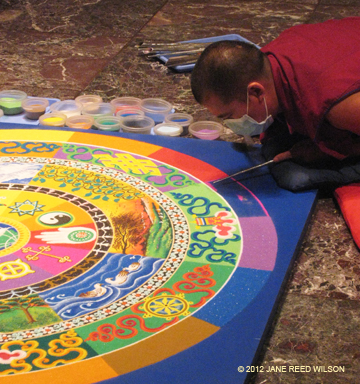 In another recent visit to my hometown, I visited the Spencer Museum of Art on the campus of Kansas University. I witnessed the installation of a sand mandala for world peace created by exiled Tibetan Buddhist monks from the Drepung Gomang Monastery. A few monks knelt on a marble floor, slowly filling a huge circle with sand to depict religious symbols and images from nature. Brightly colored sand was fed through a long metal cone to create tight detail, each grain released to the artwork by rubbing the tube with a stick. The room was quiet enough to hear a faint droning as the stick was rubbed against the cone, creating a meditative atmosphere. At the end of the day’s work, the monks sat in a semi-circle for a period of chanting—hauntingly led by a monk with a deep bass voice, the prayer rising from his throat like a leviathan slowly emerging from the depths of the sea. The next day, the entire beautifully and carefully created work of sand art was to be swept up and thrown in a pond on campus during a special ceremony. The entire process is available to view in a fascinating video, available at this link: http://www.youtube.com/watch?v=t7YkgSluGTc&feature=player_embedded

There are many types of creative acts, some of which are meant to be enjoyed in the moment, among them food, theater and music. Writing is a creative act that is not dependent on its physical form and may be translated into any number of modes, including audio. But visual art is often a single physical creation and exists to be kept and hopefully enjoyed until the basement floods or the cat knocks it over.

I was moved in witnessing the activity of the monks in creating a work of art that was never meant to be permanent. I considered such an activity to be an act of letting go of earthly bonds on their part, and I admired them for it. They were not the ones rushing around taking photos of their work, as many did that evening, but rather gave ceremony to the short-lived act and intent of their project.

We often do not willingly let go of things, or people, or memories. More often than not, we are forced to do so by physical forces beyond our control, such as the case with the broken statue. Things we don’t plan for happen. My mother died. My basement flooded last year. I think of my friends in New Jersey who may have lost so many personal belongings in Hurricane Sandy. I weep with them.

My lesson from these recent experiences has been to learn to embrace the “letting go”—not an easy task. I try to do so in a controlled fashion, but sometimes nature and decay help me along. I think at issue is the opportunity to say goodbye. A little ceremony and recognition of the creative act might be in order.

Have a glass of wine when you crumple up those early charcoal efforts from freshman life drawing class. Go into the next project with a sense of sharing and more attention paid to process than result. Say a prayer before, during and after. “Letting go” means that there will be room for other creative thoughts to enter. “Letting go” means that weight will be lifted that will enable you to soar higher.

I still have great respect for all creative projects (even the ones I don’t care for), whether I create them or other people do. Sure, keep them if they mean something to you and you have room. But I would like to think that less time archiving means more time to let the creative process flow. There is something bright within us that grows and learns with each new project. Give it room.

I am a graphic designer and art director with a love of art, nature, words and music and the ways in which they can be combined.
View all posts by jrwilsondesign →
This entry was posted in Uncategorized and tagged art, constantly creative, creativity, design, drawing, Drepung Gomang Monastery, Jane Dashfield, Jane Reed Wilson, Kansas, photography, sand mandala, Spencer Art Museum, Tibetan Buddhist, University of Kansas, watercolor, writing. Bookmark the permalink.

2 Responses to Do creative projects have a lifespan?